I’m a feminist, and so I absolutely hate men and want to do everything I can to oppress them. Feminism is, after all, about female superiority and completely ignoring the men. It’s true! Everyone says it! I want to make sure that we women absolutely demonstrate how we are better than men and herald in a new dawn of women’s supremacy.

The thing is, we’ve stalled. We need inspiration. It’s not enough that we oppress men by fighting for equal pay and bodily autonomy and generally wanting to carve our own paths in life and find ourselves on equal footing with the men. Our demands aren’t unreasonable enough yet. We need to oppress harder, damn it.

Evolutionary psychology often looks at animal behaviour and compares it with humans. I decided, in my quest to stomp my Doc Marten on the face of men forever, that I would do the same. I took inspiration from fish.

Seahorses are brilliant. The male seahorses are the ones that get pregnant. One of the biggest things standing in the way of female supremacy is the fact that sometimes we find ourselves knocked up, and we fancy carrying the foetus to term just so that the man–sorry, spunk hose–can spend the rest of his darling life paying child support. Other times, those spite abortions that we have are time-consuming. At any rate, wouldn’t it be better if it was the men who get pregnant?

Seahorse culture is like a feminist utopia. While the male is at home, bare-tailed and pregnant, the female is CEO at Coral Towers. It’s perfect! This is exactly what we as feminists want! We’re finally in our rightful places, on top of men. The men wouldn’t mind at all, either. They’d know the kids were theirs. Because men have been doing a spectacularly poor job at getting pregnant so far, we women have had to do it, and because we’re all sluts, the bloke we dupe into paying for our kids probably isn’t the real father. I’m sure this probably makes them feel sad, so I’m sure they’d be very happy about getting pregnant.

But perhaps we don’t want men to be happy, right, sisters? We’re better than them, who gives a fuck what they think about us? Really, men are only good for one thing.

Isn’t that just brilliant? The female angler fish doesn’t need to bother with listening to any of his whining, she just has the relevant bits of him on hand, whenever she needs it. We feminists could learn a lot from this. Also, we would be even better at asserting our superiority if we looked a bit more like angler fish. I’m an advanced feminist, of course. My vagina already boasts a set of teeth that could rival the most brilliant of angler fish. To my feminist sisters, when you hate men as much as I do, you, too, will grow a row of sparklers in your nether regions.

That’s still not enough though, is it ladies? I mean, that spunking cock welded to your side is eating your food! What an ungrateful little bastard. Perhaps, then, we should have a special someone over for dinner… 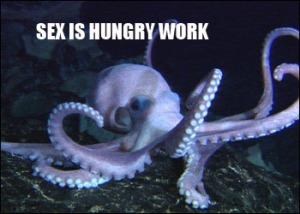 In some species of octopus, the women eat their mates. That’s right! Like praying mantises, female octopodes sometimes eat male octopodes, during or immediately after sex. That’s because sex is hungry work. Also, once they’ve blown their load, is there really any point to men? I applaud the female octopus. She has shown us the way.

But what of we feminists? We’re doing pretty well, but unfortunately we’ve still not fully assimilated into the Hive Vagina. We’re still not quite there yet. Although a lot of people think us a homogeneous mass, there’s still some traces of individualism among our ranks.

Here, we can learn from the fish once again. 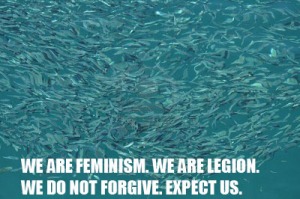 A lot of fish swim in shoals. This really confuses predators: myriad upon myriad of identical fish, they find it impossible to pick out their prey and get confused and swim off. We feminists could do well to learn from it. Imagine how much easier we’d find it to shut down debate if we fully assimilated into a swarm like so many fish do.

If we take tips from fish, we as feminists can do a far better job of oppressing men. Right now, we’re just not good enough. We’re not even equal yet. How can we achieve female supremacy if we still find ourselves oppressed by men?

Simple. We swarm and eat their heads.

7 thoughts on “How to oppress men a little more effectively: what we can learn from fish”