As London prepares for the Jubilee, it begins to resemble Nuremburg, albeit with a flag with far worse Gestalt than the original. Flags are draped everywhere. Bunting crosses streets, gold-trimmed flags hang vertically from lampposts, windows and police watchtowers. If it’s static, they stick a flag on it. Even if it moves, they’ll probably find a way of bunging a flag on it.

Capitalism and nationalism often make comfortable bedfellows, so it is hardly surprising that manufacturers of cheap tat with a tacky Union Jack on it stand to make a killing. It should also come as no surprise, then, that this flag-waving nationalism is trying is best to find its way into our bedrooms–and, in some cases, our cunts.

For the more overtly nationalistically-inclined, Ann Summers offer a Union Jack bullet, which apparently no handbag should be without. I’m glad we’ve cleared up the matter of what the Queen carries in that mysterious clutch of hers, then. Incidentally, I use the term “jack” rather than “flag” not to troll the pedants, but because there are no clear guidelines as to which one to use when the symbol is flying between someone’s thighs.

First up is the “sexy pout lip transfer“, which turns a minor erogenous zone into something resembling a BNP rally. It’s a niche fetish, but someone’s probably into it. That, however is not a sign of the apocalypse. This is: 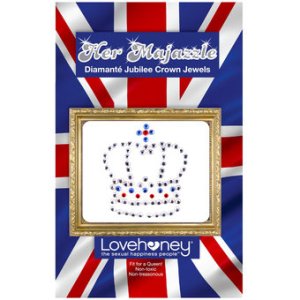 If you want your nationalistic vajazzle slightly less seasonal, never fear. You may also adorn your cunt with these Union Jack hearts, which look frighteningly similar to coasters made by small children.

BUT WHAT ABOUT TEH MENZ, you cry? Unfortunately, there don’t seem to any nationalistic products catering to men. Perhaps we really are celebrating 60 years of girls on top?

It’s not all bad, though. For the next round of bread and circuses, the discerning gentleman may like to demonstrate his support for the Motherland with this:

That right there. The Olympic Cock Ring. I would be far more in favour of the Olympics if the opening ceremony consisted of Boris Johnson and four LOCOG representatives getting in to that contraption. Given that the vendors of the product are no longer selling it, I suspect that the Olympic branding lot have issued a swift C&D, and somewhere a designer of patriotic sex toys is rotting in a police cell.

Nationalism and sex. We have moved on slightly, perhaps, since the days of cheesecake girls painted on bombs, but not as much as one might think. It is  sexy-lite which is sold to us draped in flags, the socially acceptable high-street sexy which is more about appearances than pleasure itself. It is the sex of More Magazine rather than anything else.

This Jubilee weekend, why not riot instead?

Update: @MediocreDave has brought to my attention some nationalist-sex I have missed: Zoo Magazine’s “DIAMOND BOOBILEE“. Between the disembodied tits and the fact the headline was clearly written by a six year old, I have three words: Fuck. This. Shit.

17 thoughts on “Nationalism is sexy (for small values of “sexy”)”