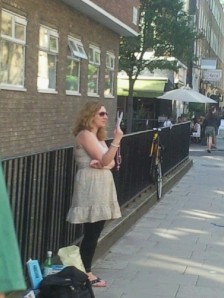 This afternoon, I had a lovely lunch with my friend Jed. We ate sushi in the park and enjoyed the glorious unseasonal sunshine. On the way back to work, our mood was sullied.

Opposite the Marie Stopes centre in Fitzrovia was an anti-abortion demo. A woman stood on the pavement, with a rosary wrapped around her wrist. Next to her, on the pavement, was the word “LIFE” spelt out in plastic foetuses. It shocked me. It was one of those things I associate with the US, not something that happened yards away from my office.

I decided to take a photo. I crossed the road, and, standing outside the centre, prepared my camera. It was at this point I realised there were two of them. The other anti-choicer, a man, stood in front of me and refused to let me take the photo. He spoke with an Irish accent. In his hands were two rosaries and a handful of leaflets printed on cheap coloured paper. I didn’t see the text, but there was a great big cross on the front, so I think I can guess at the subject matter.

I informed him calmly that it was my right to take a photograph of a demonstration, and he became rather enraged and threatening, so fixated was he on moving me away. Across the road, out of the corner of my eye, I saw Jed lining up a sneaky snapshot. I created a distraction while Jed took the photo above.

As we were about to leave, the man had been pretending to call the police. Of course he wouldn’t have really called the police. He had been rather threatening towards me, and the demonstrators were wise not to want their pictures taken. They were in the process of committing a crime: section 5 of the Public Order Act, causing harassment, alarm or distress. Having an abortion can be a very stressful experience for people, and this is exacerbated by people hanging around with misleading leaflets, rosaries and plastic foetuses, harassing them and causing distress.

I found it very interesting that the woman never spoke. She stood, placidly in her position while the man spoke for her: “She doesn’t want her photo taken”. It was a microcosm of patriarchal privilege and power, which is a huge motivator of the anti-choice agenda.

The experience left a bad taste in my mouth. It is one of those things that I hope I will never see again, but, sadly, I suspect I will. I do not want such demonstrations banned–it sets an ugly precedent, and those anti-choicers have as much right to protest as any other soul.

But I don’t want to see it again. I don’t want women to have to enter clinics for advice, for contraception or for abortions when they are at risk from harassment. So what is the answer here?

Long-term, it is to build a world where choice and bodily autonomy is respected completely, and nobody feels the need to be poking about in someone else’s womb-business. For now, though, we must work to foster an environment where anti-choice demonstrations are not welcome–a less confrontational, smaller-scale version of counter-demos against fascist groups like the EDL. This may be as small as taking a photograph of the demonstrators. We may, at some point in the near future, need clinic escorts, who protect people entering centres from the anti-choicers.

I don’t want to ban demos like this, but I truly hope that I never see one again.

8 thoughts on “I encountered an anti-choice demo”